– Brought to you by Sleipner
Visit webpage

Stabilizing systems have been around for a long time, but traditionally only for larger ocean-going vessels. However, the technology is now rapidly finding its way to smaller vessels. A large number of manufacturers now offer stabilization for recreational yachts and workboats in the sub-50-meter range. On this page, you will learn about stabilizing systems for yachts, superyachts, and workboats. We will focus on active systems for roll reduction at sea for monohull vessels, both underway and at anchor (zero speed) stabilization capacity.

Why do you need a system for stabilizing your vessel?

Heavy winds and rough sea. If you have ever been tossed around on a boat and felt seasick during the voyage, you recognize the need for a system stabilizing the vessel. Seasickness is perhaps the worst effect of a rolling, unstable boat, but it is not the only one. Passengers and crew traveling on yachts, ferries, cruise ships, workboats, tugboats, and offshore vessels are hoping for a smooth ride in good weather. Under the worst conditions, you can find yourself caught between plates and cups flying around due to heavy rolls, it can be challenging to move around the ship, and security onboard is put at stake.

That is why there is put considerable effort into solving the physical challenges according to roll reduction. Rolling is indeed the most significant problem among all the other motions at sea. Technological advancements in the design of ships have already given naval architects the advantage to study the wave motions around the hull of the ship and provide the best possible design to minimize such effects and ensure a comfortable and safe voyage for both passengers and crew.

For workboats that operate under rough conditions, an active stabilization system can make the difference between getting the job done safely or not done at all. A stabilized vessel improves the seamen's safety and comfort significantly as boat roll is almost eliminated, both underway and at anchor.

Marine stabilization systems have become big business. Today you can choose between several providers, using various methods to decrease roll. Roll motion stabilization can be achieved in conventional ships by changing the form of the hull. Reduction in roll amplitudes is also possible by other means. Broadly, we classify stabilization systems in two categories:

On this page, we will primarily focus on systems. Depending on the planned use and type of boat, there are mainly three methods you can choose between: active tanks, gyro stabilizers, and active fin stabilizers.

When designing a new yacht, we recommend thinking carefully through the advantages and disadvantages of the various options when choosing technology. Start by asking yourself these questions:

A brief overview of active systems

rolling tanks, the movement of the water is controlled by pumps or by the air pressure above the water surface. When the water is forced against the power of the waves, it provides stability. Depending on the sophistication of the system, active tank stabilizers have been found to leave an efficiency of 80 percent or more in motion stabilization. Nevertheless, this system requires so much onboard space that it will not be applicable to the vessels we focus on. 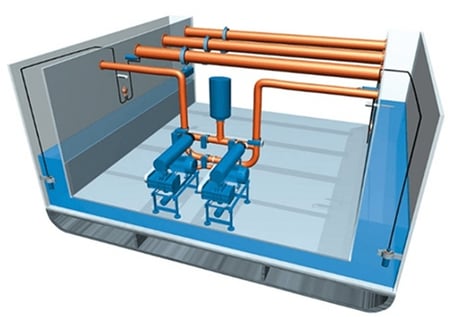 Gyro stabilizers can be fitted into smaller boats and are also used by large ships and carriers. In a large you might see the need to install more than one gyro stabilizer. Gyro stabilizers are using the physical laws of precession to work against sea motions. Precession is a physical phenomenon that appears when a rotating object's axis "wobbles" while exposed to the effect of an external force. While spinning the gyro tilts fore and aft as the boat rolls, it creates a torque that pulls up on starboard and down on , or vice versa. This reduces roll. The World War I transport USS Henderson, completed in 1917, was the first large ship with gyro stabilizers. It had two 25 ton and nine feet diameter flywheels mounted near the center of the vessel, spun at 1100 RPM by 75 HP AC motors. 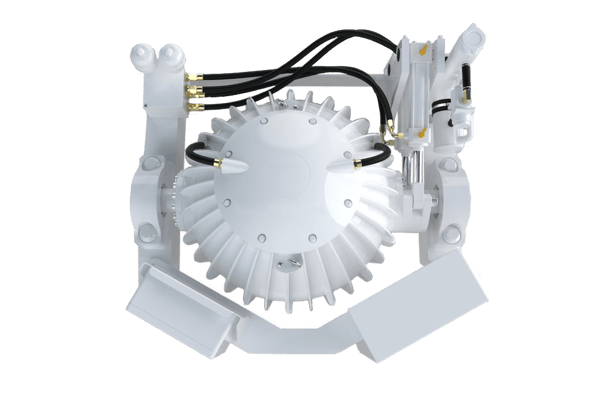 Active fins are fitted outside the hull. Sensing the rolling motion of the ship, a gyro sensor sends a signal to the actuating system. This causes the fins to move in a direction that the roll. The bigger the boat and the longer the lever between the of gravity and the fin, the more power it gives. The active fins get stronger the bigger and wider the boat is. Fin stabilizers are vastly more efficient at higher velocities, while they lose effectiveness when the ship travels at minimum speed. At low speed or anchor, stabilization-solutions include actively-controlled fins. The first use of fin stabilizers on a ship was on a Japanese cruise liner in 1933. 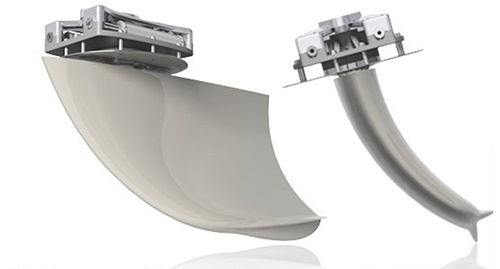 The video below shows active fins and their impact on the hull's movement in 0,5-1 meter high waves at zero speed:

Which stabilizer system is the right choice for you?

These are the pros and cons of active fins and gyro stabilizers. Let your preferences decide which system is the best for your use.

Professional yacht broker Jimmy Rogers has written this article summing up the pros and cons of fins and gyros.

Fin stabilizers come with the only system that can handle both cruising and "at anchor" use. The "at anchor" stabilization force determines the size of the fins. Larger fins provide higher stabilization force, but also create more drag. This equals higher fuel consumption, an element that is often decisive for most boat owners. Larger fins also mean that the internal components grow in size, making it more difficult to install them in an optimal position. This can result in negative side-effects like causing yaw (steering effects) and sway (side-way movements). Thus, the overall situation often results in a compromise in fin size, meaning most fast boats today do not have the stabilization their owners want.

John Maxey is the owner of a Fairline Squadron 78. In the video below he shares his experience with a Side-Power stabilizer system:

The most advanced fins today have a much better force angle than the older flat fin systems, providing a lot less drag as they also create lift. The improved force angle reduces the unwanted side effects of yaw and for installations that are not perfectly situated on the hull. The increased efficiency of these new designs means that smaller fins can achieve the same stabilization force as bigger flat fin systems, while simultaneously reducing the internal component size necessarily.

Installation and planning of stabilizer systems

Whether you are planning to get stabilizers for a newly built vessel or a retrofit, you should be aware of some key factors. Firstly, you must make sure the hull covers the basic stabilization requirements, meaning it has to be prepared for the extra load and strain. As a naval architect, you have the freedom to design the hull as you wish in relation to stiffness and rolling. If you are going to have a stabilization system onboard, you can plan for a softer hull. Normally, a softer hull means more rolling. With stabilizers, however, you should only comply with the minimum requirements. This will provide greater freedom and a more fuel-friendly hull.

With Side-Power's installation guide, it is easy to do the right measurements while on the drawing table.

Recommendations and practical use

The Side-Power Vector fins™ improve the roll reduction efficiency by some 50 percent in at anchor mode, and 30 percent in cruising situations compared to flat fins. At the same time, they dramatically reduce undesired yaw and sway motions caused by active fins.

The vast benefits of efficiency and the reduced side-effects make them particularly ideal for today's modern, fast cruisers. Traditionally, standard fin stabilizers have not satisfied the desired roll reduction without causing too many side-effects. This is particularly true for light-weight cruisers below 20 meters. Due to their shorter roll time periods, they are particularly difficult to stabilize. The Vector fins™ unique advantages make them the preferred choice for smaller, fast boats, a market that previously lacked ideal overall solutions for both cruising and anchor stabilization. 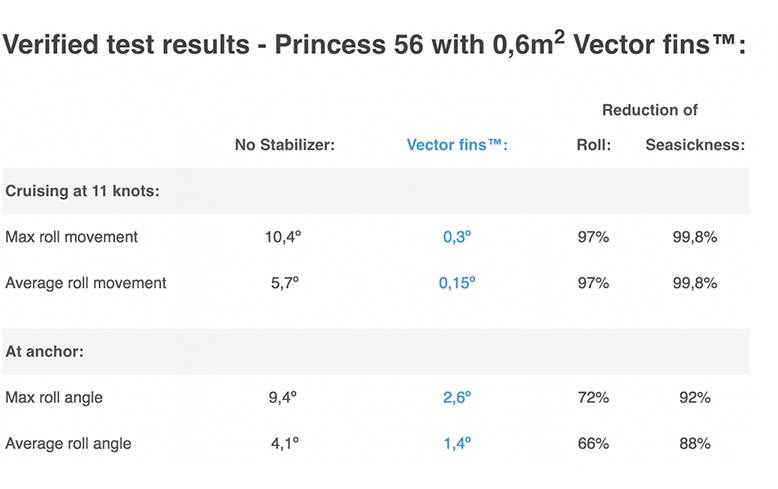 In the video below, Captain Richard Kennedy of "Anna J", shares his experience with stabilizers. After several thousands of hours behind the rudder, he has seen the light.

What is the price of a functioning stabilizer system?

The cost of installing a stabilization system on a boat varies depending on whether the boat is new or used, not to mention the boat's design characteristics. A stabilizer system will cost about 2-4 percent of the boat's total cost. Complete installation on a 70 feet long new motor yacht will cost around  GBP 70.000. The price range of active fins is smaller than for gyros. Because the gyros weigh four times more than an active fin-system, you have to strengthen the hull and give up space for the two-ton gyro-box.

Be aware that you usually don't install fins on boats smaller than 50 feet. The gyros will fit in vessels as small as 30 feet. Both systems can be retrofit in a motor yacht, which is great news for a proud boat owner who will rather install a stabilizer system on his ten-year-old rolling lady than buying a new motor yacht.

The direct benefit of the stabilization systems is clear when it comes to comfort and safety aboard. Consequently, this allows usage of the vessel when it otherwise would have stayed in port. For , charter boats, and other vessels that generate an income by the hour, a stabilization system can be a smart financial investment. If you are buying or selling a boat second hand, it is worth noting that stabilization gets a lot of attention in the market. We already notice a significant advantage in the market for vessels with a good stabilization system onboard, and we see no reason to expect this to change in the future.

How to choose the right stabilizer for your vessel?

With several manufacturers on the market and various technical solutions available, it is worth doing some research to find the stabilisation system best suited for your vessel. Some systems claim to be better at anchor, while others claim they're better underway. The final choice often comes down to the boat owner's intended use of the vessel, the design or hull limitations, and whether it's for a new or retrofit boat.

This checklist of important features/performance points might be helpful in your considerations:

At Side-Power, we provide you with the best advice based on your actual use and need. We have our Vector fins™ as a preferred product, offering highly effective roll reduction at anchor and underway. You will have to make some compromises when you choose which stabilizer system to invest in - we aim to provide you with the best possible foundation for making that decision.

Please get in touch with one of our worldwide resellers or head office for more information.